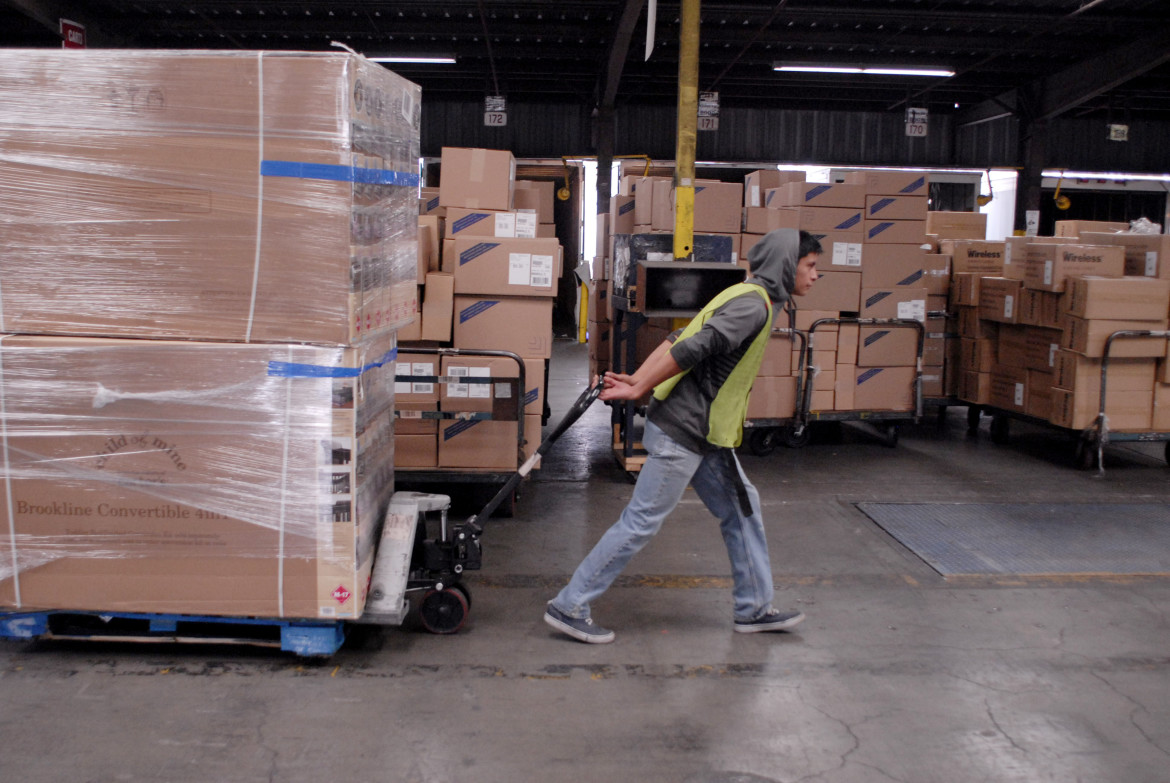 IN THE U.S. food supply chain, 20 million workers labor in hazardous conditions for low wages. Uylonda Dickerson was one of them. Dickerson, a 39-year-old single African-American mother in Will County, Illinois, would show up every morning, hoping for work, at one of the many warehouses that litter the landscape of her area southwest of Chicago.

The Chicago region, once a proud steel and manufacturing hub, is now a major portal for food and other commodities produced cheaply overseas, transported by rail from West Coast ports, and slated for destinations in the Midwest or on the East Coast. Ironically, the workers—more than 80 percent of whom are African American or Latino—who were displaced from good, union jobs when factories closed are now employed in bad, temporary jobs, moving goods made in China.

The warehousing and storage industry, which feeds big-box retailers such as Walmart, relies on a pool of temporary laborers. This exempts employers from paying living wages or providing basic benefits and workers’ compensation; it also short-circuits worker attempts to organize into a union. Their costs of living are then displaced onto society. One in four warehouse workers relied on public assistance to survive, according to Warehouse Workers for Justice’s report “Bad Jobs in Goods Movement.”

On days when there was work, Dickerson was not paid an hourly rate, but by how many trailers she unloaded. She was sexually harassed by male colleagues and harangued by her supervisors for taking bathroom breaks. The job took a physical toll: “My body still is not the same,” she told a Huffington Post reporter. “I still have aches and I still have pains. I have migraines because of the stress I went through.”

People of color are particularly concentrated in the lowest-paid sectors of the food chain: agricultural labor and retail service, according to “The Color of Food,” a recent report by the Applied Research Center. At all stages of the supply chain—production, processing, distribution, and service—people of color make less than white workers. In the distribution sector (which encompasses warehouse and storage workers such as Dickerson), the typical yearly wage for a white worker is $42,234, while a worker of color earns only $27,452.

For women, there’s an additional penalty: Women of color make 30 to 50 cents less for every dollar earned by a white male worker. Food chain workers are also particularly vulnerable to sexual harassment; for example, in a 2010 survey of women farm workers in California’s Central Valley, 80 percent reported experiencing such harassment.

A manager in the logistics industry has the potential to earn a family-sustaining wage, but, with only one managerial position for every 100 warehouse jobs, few opportunities exist for warehouse workers to move up the career pathway. Not many of those opportunities go to people of color: Whites make up 74 percent of managers and 85 percent of chief executives. Women of color are even rarer in the executive class, making up just 10 percent of all managers.

Much of the labor in the food system cannot be outsourced—a key leverage point for worker advocates. Across the country, warehouse and storage workers are contesting the precarious conditions in which they labor. Warehouse Workers for Justice has filed nine lawsuits and numerous complaints with state and federal government demanding enforcement of labor laws. Advocates representing warehouse workers in California’s Inland Empire are pursuing similar measures. And Uylonda Dickerson is now an organizer with Warehouse Workers for Justice, working to shine a light on the conditions for the workers who stock the grocery shelves at Walmart.